My blog has moved! I've moved my blog to my website! You can now view all of my blog posts at BananaMoonStudio.com. Going forward, new posts will only be on my website, so you'll want to be sure to bookmark my new site, and sign up for my newsletter so that you don't miss a thing! See you there!

Well, it's been awhile since I have posted any pictures of projects. I have still been crafting, but I've had so many projects going at once that I haven't been finishing a lot. I also haven't been taking the time to blog about it. I have been very busy with a new baby, but I find that new babies are easier to take care of when you've been there a few times before (assuming that the baby in question is a fairly healthy, cooperative baby, which ours is). So, I have some pictures to post of projects in process. The most important and highest priority project has been a twin size quilt for our second daughter. 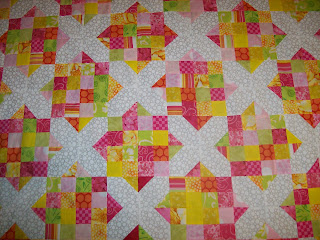 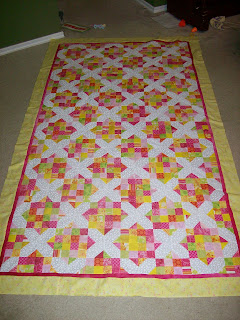 I finished the quilt top a few days ago. Whew! I started this at the beginning of the year...maybe it was in the spring actually. I determined that I would finish it by the end of the year. With the top finished all I have left to do is the tying a binding. I really prefer the look of quilting as opposed to tying, but I wouldn't finish it for years if I had to quilt it, so oh well.
Another high priority project right now has been preparation for Halloween. I usually wind up making at least one costume. This year it was a costume for the same daughter that is getting the quilt. I'll post some pics and more info on that later, but I'm finished with that. Thanks to my friend Amber for giving us a dragon costume that we are going to make work for our oldest daughter.
This next one is a project I have been working on for awhile as my project to work on when I have nothing better to do. This is all laid out on my bed. It is hard to see all of it, I know. So, it looks rather odd. I have lots of old bits, or even large bits, of yarn that I have no intention of ever using again. Most of it is old crusty acrylic yarn that I don't care for by either feel or color. I decided that I would take these old leftovers and get some practice with stitches and techniques that I hadn't tried before. I have tried cables and plaid and various interesting stitches. I've taken these odds n' ends and laid them out on my bed into a rectangular shape. My plan is to sew them all together to make a very scrappy, and rather ugly, afghan for the kids to use in the car. I realize that it is not the least bit attractive looking, but they'll have fun with it anyway. As a bonus, I used up some old yucky yarn to make way for new yummy yarn, and I got some practice with new stitches. 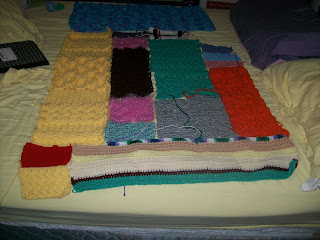 This picture is one of a pile of crocheted squres that are destined to by part of an afghan to donate to a charity organization called Warming Families (http://www.warmingfamilies.com/). The pattern comes from Crochet Today magazine two issues ago. Myself and several friends are all making squares that I will be sewing together and edging before sending to Warming Families. These are all the ones that I have made and a few from one friend. Many more are in the process of being made by the same and numerous other friends. 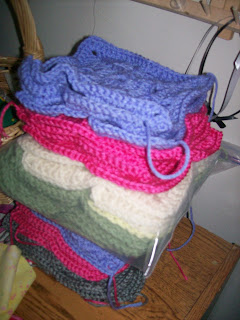 This next picture is my first attempt at freeform crochet. This has not been blocked so it doesn't look as nice as it might. I had a t-shirt from a few years back that was not very long, from the days when showing your mid-drift was in style...maybe it still is... Anyway, my thought was to make two sections of freeform lace to sew together and then attach to the bottom of the shirt to make it longer. Well, I started on it and decided that I didn't like the attaching it to the shirt idea. I didn't like the look of it, but the freeform lace is pretty. If you want to try it out, you just start crocheting any which way you like. There is a book by Myra Wood called "Creative Crochet Lace" that teaches you all about the idea. It is not mindless crochet however. I like to be able to keep my hands busy crocheting while watching movies with my hubby or waiting for webpages to download on my slow computer, but this type of crochet isn't like that for me. I have to think about it. I'm not sure what I'll do with the two pieces I've made, but maybe I'll find a use for them later. It was fun to try. Maybe I'll try it again sometime. 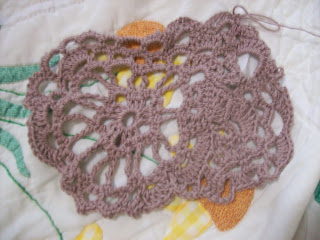 The next (and last) four pictures are of books that I have acquired over the last year. Three of them are crochet books and one is a quilting book. The first picture, I'm sure you can see the title just fine, is a nice instructional book , though I'm not sure that it's the best, for beginners. It does provide instruction on some slightly different crochet techniques that I would like to try at some point: tunisian crochet, hairpin lace, and broomstick lace. It also has numerous stitch ideas like a mini stich dictionary. 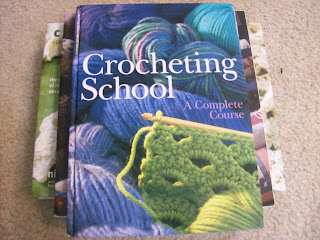 This is the quilting book. I will say unequivocally that I do not like this book. I wish I hadn't bought it. For starters that blocks that are photographed for the book are not pieced well. Lots of lines that ought to be straight are crooked. They are not made in particulary nice colors. Those blocks that are intended to look like a picture of something are not detailed enough to look nice to me. So, I would not recommend it. 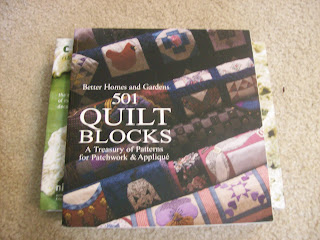 This book is called "Crocheting on the Edge" by Nicky Epstein. It has some beautiful crocheted trims in it. It also has some patterns/project ideas. I like some of them. It is a nice book to have if you are looking to choose your own edging for a project. 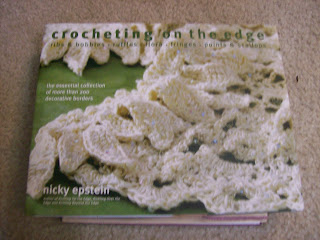 This is my latest acquistion. I just got this last week after ordering it two weeks ago. It is a crochet stitch dictionary. I really like the colors they used in the swatches. It has lots of stitch patterns to choose from. This is a good way to get your creative juices flowing when you are trying to come up with your own design for something. 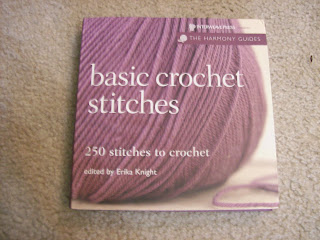 Well, that shows you most of what I've been up to lately. The other project that I have just started, but will not make a high priority for awhile, is a felt stocking (kit) for our baby. It won't be finished by Christmas, but she won't be old enough to notice. I'll use an extra that we have this year. Another project I would like to start, but won't just yet...I can't imagine why..., is a backpack for our oldest daughter. She is not into princesses so much, she prefers dinosaurs, dragons, and sharks. She was given a princess backpack for her last birthday though, so we are using that for now. I'd like to make her a backpack and applique a dragon to the front of it. I have also drawn a cute turkey that I would like to make into an applique for a wall quilt. This is the next project that I have planned for the Needle Arts Group that I organize for my friends and church members. So, I'm happily saturated with craft projects!
Posted by Unknown at 8:53 PM No comments:

Well, yesterday I had some very exciting news. I'm going to get my very first garment design published! I'm very excited. I look forward to spilling the beans about it when it comes out. I can't say much until then.
Posted by Unknown at 8:10 AM 4 comments: 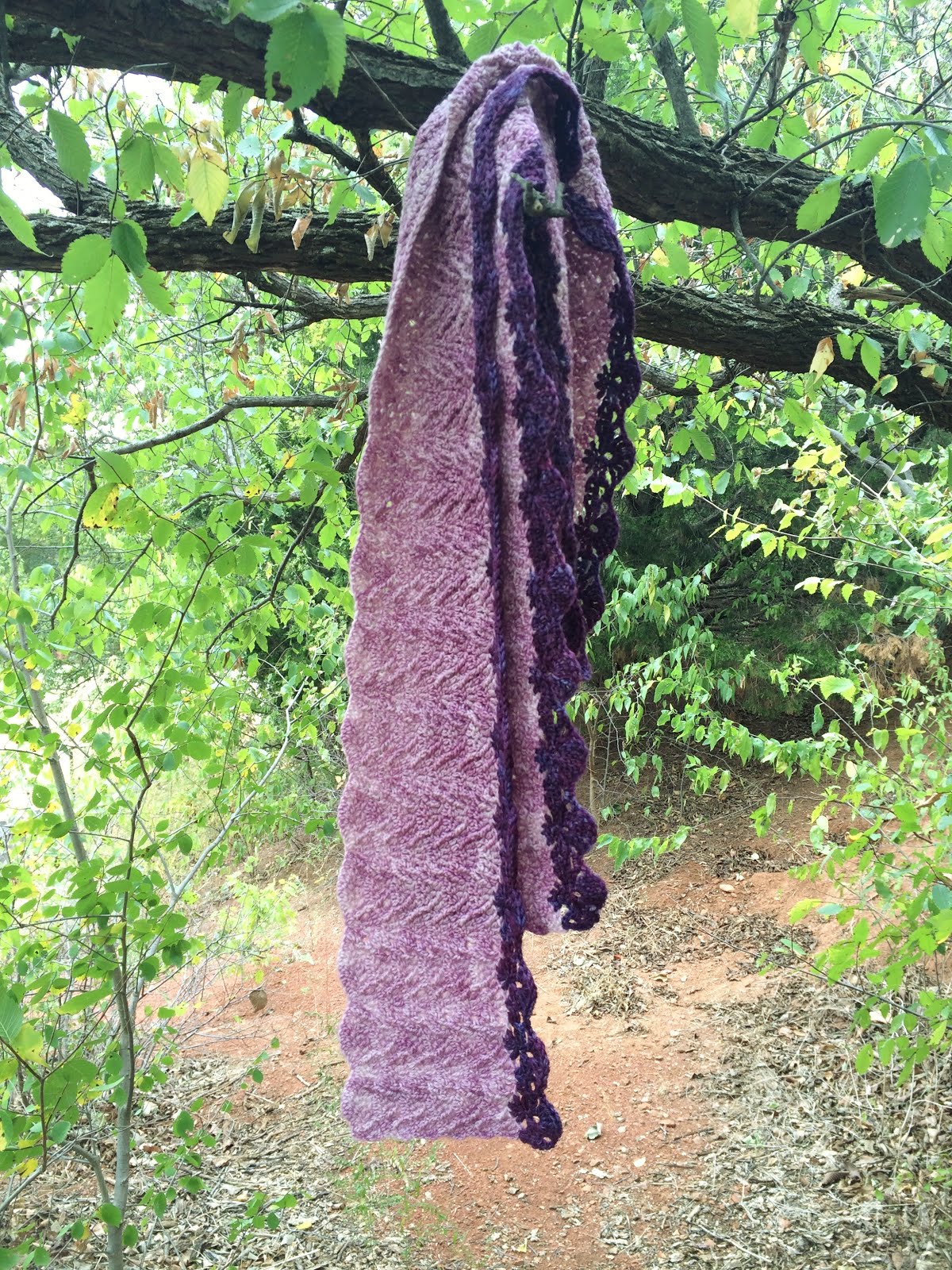 "We were created with the express purpose and potential of experiencing joy. Our birthright -- and the purpose of our great voyage on this earth -- is to seek and experience eternal happiness. One of the ways we find this is by creating things...As you...create something of beauty and helpfulness, you improve not only the world around you but also the world within you." --Elder Dieter F. Uchtdorf, Second Counselor in the First Presidency of The Church of Jesus Christ of Latter-Day Saints